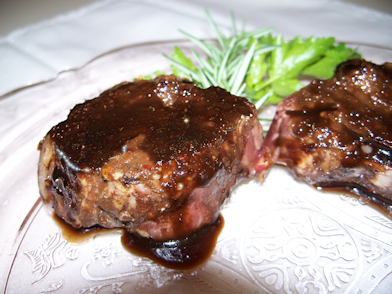 Directions:
1. Combine ingredients for stuffing in a mixing bowl. Mixture should be mostly dry
2. Cut horizontal pockets on the roundest side of each pork chop for stuffing. Try to make the pocket as large as possible without piercing the other sides
3. Place the stuffing into a plastic bag with one corner cut off, and squeeze half the mixture into each of the two chops
4. Pour a little of the vinegar into a casserole bowl that is only slightly larger than the chops laid side by side. Position the chops in the vinegar, making sure the vinegar isn’t high enough to reach the incision for the pocket. (We do not want the stuffing to be wet). Refrigerate for one hour. Turn the chops over and chill another hour
5. Season the chops with salt and pepper to taste

To grill: Grill on medium high heat for 3 minutes. Turn each chop 90 degrees after 3 minutes to obtain a nice grill mark pattern. Cook another 3 minutes. Flip and repeat on the other side. Cook until the internal temperature reaches 150 degrees at the thickest part. Remove and let rest, covered, at least 5 minutes before serving

To Roast:These chops take on an awesome appearance when roasted in a high-wall cast iron skillet or Dutch oven on high heat (400 F), as shown in the above photo. Heat the greased skillet in the oven before starting to cook. Roast 3 minutes in the oven with the chop touching a side wall. Move the chop so another side touches the side wall of the skillet and roast another 3 minutes. Flip, and repeat on the other side Roast until the internal temperature reaches 150 degrees at the thickest part. Remove and let rest, covered, at least 5 minutes before serving

Serving Suggestion:
While working the chops, cook the balsamic vinegar over medium heat in a sauce pan to reduce it by half. Drizzle the balsamic reduction on the chops at time of service for a burst of sweet-sour flavor