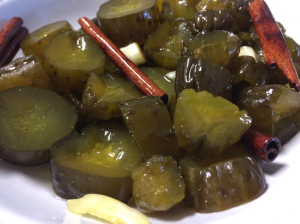 Ingredients:
½ gallon Kosher Dill pickles
3 ½ cups sugar, divided
1/3 cup apple cider vinegar
3 sticks cinnamon, each broken into several pieces
3-4 garlic cloves, peeled and coarsely chopped
NOTE: Lea likes the smaller to medium size pickles to be served whole. I like to slice the big ones in bite-size chunks as shown here. I think the chunks are crunchier, but I haven’t convinced her. (wink)

Directions:
1. Drain pickles, discard the liquid (or, reserve for pickling other veggies.
2. Cut pickles into 1/2 inch pieces, or quarters, and set aside momentarily.
3. Pour 1/2 the sugar into the bottom of your large bowl. (If you put all the sugar in the bottom, it can be really hard to stir at first without damaging the pickles.)
4. Add the vinegar, broken cinnamon sticks, and garlic.
5. Pour in the pickles, and then the remainder of the sugar.  Stir to mix.
6. Let stand on counter, covered, for 2-3 days, stirring occasionally.
7. After the 2 or 3 days, put entire contents of the bowl into the original pickle jar. (Seal carefully, as you’ll be turning the jar over several times.) Refrigerate.
8. Best after refrigerated for at least 2-3 days, but a week is even better! Be sure to turn the jar over every couple of days to distribute the pickling juice and spices.

Marjorie Thistlethwaite (JB’s mom) gave me this recipe in Chillicothe, Missouri at one of their big Thanksgiving feasts.  I believe it was in 1986.  It has since become a tradition at Vaughn family gatherings, too.  These pickles are so easy to make and are better than any other homemade or store bought pickles I have ever had. They are SO crunchy! Trying is believing!
For a whole gallon of these, check out our recipe on Cooking4Groups.